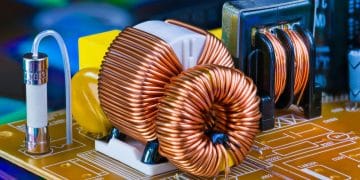 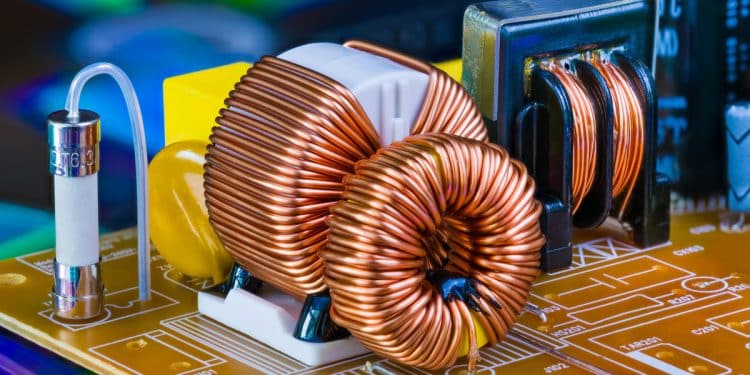 This article written by Jeff Shepard discusses brief background on wire-wound inductors and then digs into the cost and application trade-offs associated with multilayer SMD thin and thick film inductors, flat inductors (including Litz wire with a rectangular cross-section), and foil inductors.

Wire wound structures are the most common, but far from only, way to make inductors for audio, power conversion, radio frequency (RF), and other applications. Inductors are key components in various circuits, and designers need to fully understand available options.

Inductors and chokes are differentiated by how they are used. Inductors are used primarily on power and signal lines to filter differential noise and to store electrical energy in power conversion circuits. The component is referred to as a choke when used to filter common mode noise.

In the most basic implementation, an inductor consists of a coil of insulated wire (magnet wire). Inductors can be free-standing or wound on a plastic core to make an air-core inductor.

To support higher inductances, a ferromagnetic core can be used. When a ferrimagnetic material is used for the core, it’s called an iron core inductor.

The core is a key component in an inductor and has a major impact on performance. Ferromagnetic cores have a high permeability that increases the strength of the magnetic field, resulting in higher inductance values. Laminated steel cores prevent eddy currents and improve the efficiency of inductors used at line frequencies. Soft ferrite cores are used for inductors that operate at frequencies above a few tens of kHz. Inductors designed to filter very high frequencies can be made simply by stringing a ferrite bead on a wire.

Inductors in electronic systems can be made with wire coils, multilayer structures (Figure 2a.), or thin-film materials (Figure 2b). The core of wound inductors contributes to a lower DC resistance of the windings and improves the efficiency of the inductor. Multilayer inductors consist of laminated or printed structures and are often used on signal lines as part of a filter or impedance matching circuit.

The ‘wires’ in these inductors consist of a coil pattern screen printed on multiple layers of ferrite substrate material. Their three-dimensional structure is completely covered by the ferrite, which acts as a magnetic shield and reduces leakage, making them especially suitable for high-density applications. When the frequency exceeds a few hundred MHz, ferrites experience increased losses and are not suitable as substrate material. In those applications, a dielectric ceramic substrate is substituted for the ferrite.

In addition to mitigating the skin effect, flat wire can have a winding factor of up to 95%, making for smaller inductors. In a conventional wire-wound inductor, the unused space in the gap between the windings can be up to 30%, compared with only 5% for flat wire (Figure 3).

To further increase the effective density, some flat wire inductors have a powdered iron core molded directly around the wires. That eliminates all wasted space and results in higher efficiency and smaller packages for given inductance and current ratings.

Flat wire is great at providing a more effective surface area in conductors, reducing the impact of the skin effect, and improving packing density and thermal dissipation. But Litz wire can take those performance benefits to the next level. Litz wire also reduces losses from the proximity effect.

When alternating current flows through adjacent conductors, the current distribution in each conductor will be constrained in small regions by the magnetic fields. This current crowding is called the proximity effect and increases the effective resistance of the conductors compared with the DC resistance. At high frequencies, the proximity effect can increase the AC resistance by order of magnitude compared to the DC resistance. As a result, Litz wire is often found in high-frequency and high-current inductors (and transformers) that operate at hundreds of kHz.

Litz wire comprises many small insulated copper wires braided or woven together. Using specific braiding or weaving patterns, the proportion of each strand at the exterior of the wire is distributed equally among the strands and results in an operational efficiency up to 100% higher than conventional wirewound inductors. Simple twisted-strand wire cannot deliver the efficiency improvement of Litz wire. Litz wire can be round or rectangular; rectangular Litz wire can support high winding factors like flat conductors, but with an even greater decrease in skin and proximity effects (Figure 4).

Foil inductors can be used across a range of power applications. Today, they are mostly used in audio systems such as loudspeaker crossover networks. (Figure 5). Audiophiles like the acoustic characteristics of copper foil inductors. They are fabricated with high winding tension, and the faces of the foil conductors are fused in place, making a highly stable mechanical structure. Wirewound inductors, on the other hand, may not be as stable and can allow relative motion in the audio range between the conductors resulting in frequency modulation distortion and a lower quality of sound.