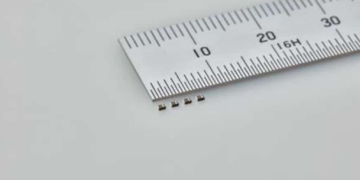 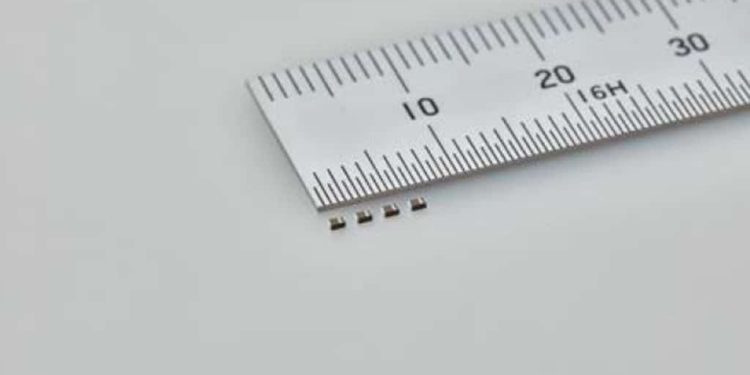 Taiyo Yuden has expanded its line-up of the metal multilayer chip power inductor MCOIL MC series, which employs a metallic magnetic material, as well as the commercialization of what is claimed to be the world’s smallest metal power inductor MCEE1005 (1mm x 0.5mm x 0.55mm, maximum height).

This power inductor is employed as a power choke coil in power supply circuits for smartphones, wearable devices, and IoT devices. By developing their material and multilayer techniques, the company has successfully commercialized this 1005-size metal power inductor, creating a volume that is over 60% smaller than their conventional product, MCFK1608 (1.6mm x 0.8mm x 0.6mm) and contributes to developing smaller and thinner mobile devices such as wearable devices.

Production of the product started at our subsidiary company, WAKAYAMA TAIYO YUDEN CO., LTD. in Japan’s Wakayama prefecture from September 2018 at a production rate of 10 million units per month. The sample price is 50 yen per unit.

Today’s market for smartwatches, wristband-type wearable devices, and IoT devices like sensor network devices requires not only reduced size and thickness but also highly efficient power supply circuits for longer operating time. While smartphones are getting thinner, they use higher-speed processors for higher performance and multi-core processors for higher efficiency. Since high-speed multi-core processors, which are driven by lower voltage and larger current, use appropriate cores in accordance with processor load, each core is equipped with a dedicated power supply circuit, which requires small and thin power inductors with a large current capacity.

To address this market need, TAIYO YUDEN has commercialized its metal multilayer chip power inductor MCOIL™ MC series, which uses a metallic magnetic material with high DC bias characteristics and has the advantage of being small and thin. We have now successfully commercialized the world’s first 1005-size metal power inductor, MCEE1005, which achieves a volume that is over 60% smaller compared to our conventional product, MCFK1608.