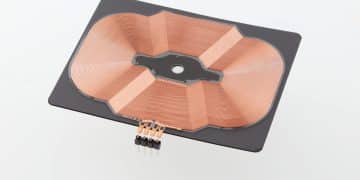 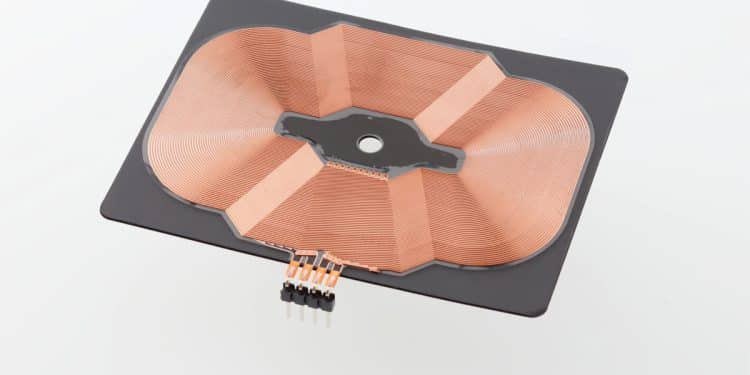 TDK Corporation has introduced a thin pattern coil to support the wireless charging of next generation mobile devices. Mass production began in May 2022.

The WCT38466-N0E0SST101 product was developed without employing conventional lithographic exposure/etching techniques. Instead, TDK’s game-changing process technology was leveraged, in combination with plating technology using the nano dispersion of the organic compound polypyrrole, developed by Achilles Corporation.

Although wireless charging coils have generally been produced by winding wires, this new approach has made it possible to manufacture them using a thick copper pattern on a thin film.

This, along with the application of TDK’s proprietary magnetic materials has enabled coil thickness reduction down to 0.76mm – which is approximately one-fifth of the thickness of traditional 3.8mm diameter wound wire coils. Furthermore, the use of TDK’s original optimal coil shape pattern means that the new coils cover a larger charging area, resulting in greater user convenience.

The wireless transfer of power to mobile devices, such as smartphones, has considerable appeal. Uptake of demand for wireless charging is being seen in home, office, retail and automotive environments. With their dramatically thinner diameters, the TDK coils, which are compliant with the Wireless Power Consortium’s widely-adopted Qi standard, will open up new opportunities for wireless charging deployment. In addition, while it was previously necessary for three coils to be incorporated into wireless charging systems, now only one coil will be required, thereby enabling system miniaturization.

TDK will continue to progress the development of wireless power transfer technology, aiming to make it ubiquitous to future society.