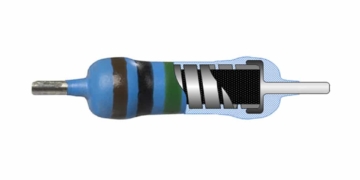 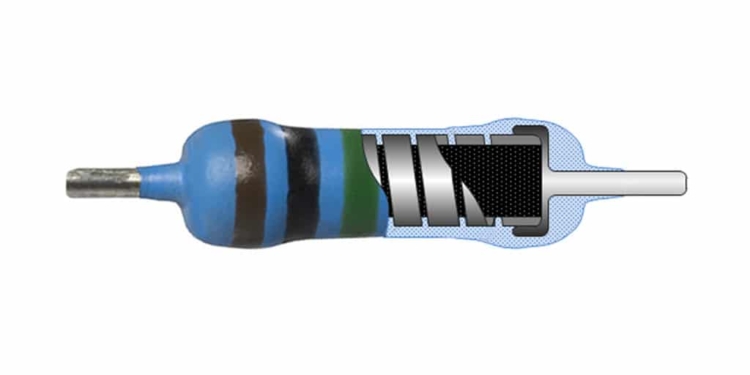 Apart of wirewound resistors resistive elements may be produced and arranged in a lot of different ways by non-wirewound technologies.

We shall present in the article the following resistor types, differentiated by constructional material or specific design such as thin film, foil, thick film and carbon resistors.

Film resistors are built either on cylindrical rods or on planar substrates. Usually the material in the rods and substrates is ceramic in the state of aluminum oxide (alumina), but glass may occur. Hollow cores exist but are more and more abandoned when sizes are becoming smaller. This design suffers also from drawbacks: the construction is more fragile and the heat dissipation is poorer than that of a solid core.

A typical film resistor is shown in Figure 1.

The film of the cylindrical rods thus are cut in a helical track to a long path, usually with a laser. A more stylized sketch is shown in Figure 2. The pitch of the helix track can be varied in order to increase the resistance of the film. For thick films an increase of up to 150 times, for carbon and metal films up to 1000 times or even more.

As indicated in the figure a stray capacitance is developed between the turns. Because the turns also constitute a coil the resistor will get a certain inductance. All in all the spiraling produces a frequency dependent impedance where the capacitance is dominating. The conditions are illustrated by the Figure 3.

Film resistors may be approximately classified as follows:

A strong overload of carbon and metal film resistors will lead rapidly to an open circuit that in most cases is accompanied by a build-up of smoke, glow or even fire. Some manufacturers have developed designs that burn off within certain limits. They are called fusible resistors. The open-circuit conditions are defined in particular power-time diagrams. The limits still must be regarded as “broad”.

If coatings and casings are used that don’t generate or sustain a fire, we talk about flameproof resistors. The drawback with these casings in past was partly an impaired environmental protection and partly a troublesome environmental disadvantage from a recycling viewpoint, since they often contain bromine compounds. The modern flameproof resistors has replaced the bromine based fire retardants by a metal oxide compounds. Check with manufacturer datasheets.

Film resistors also exist as discrete SMD chips or in so called resistor networks where they are collected under a common housing.

The connection between stability, operating time, temperature, power and resistance usually are shown in particular nomographic load charts. Figure 4. shows such a diagram for a sample film resistor. The example reveals how an 1 kΩ resistor working with 0.24 W at an ambient temperature of 80 °C gets a Hot Spot temperature of approximately 137 °C which after 10 000 hours operation produces an expected resistance change of approximately 0.4%. Such a modest change indicates a considerable derating of the nominal power that very well could have been 0.4 or 0.5 W in this example.

Consequently a nomographic load diagram corresponds only to one type and size (power).