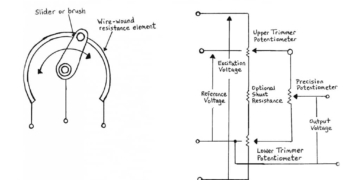 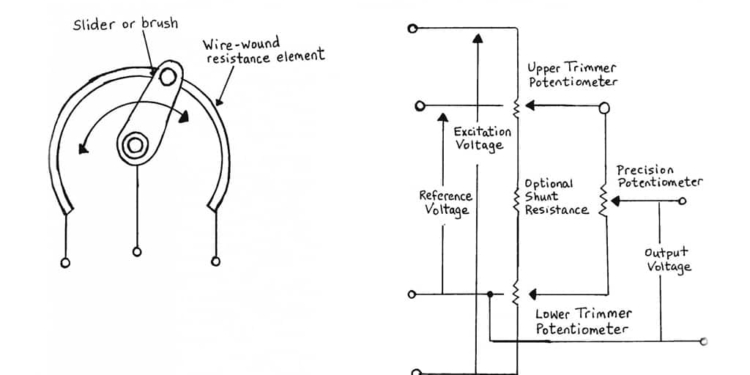 Variable resistors include Potentiometers, Rheostats and Trimmers that will be discussed in details in the following article.

Variable resistors are electromechanical components and therefore exposed not only to the weaknesses of fixed resistors but also to all the failure possibilities of electromechanics. Thus the reliability is comparatively poor.

The total resistance seldom is critical and usually follows the European E3 series or 1-2-5-10 (USA).

A potentiometer (short name “pot”/”pots”) may in its most simple form be drawn schematically as in Figure 1.

With the slider positioned in either of the two end points we measure between the fixed terminals the Rated resistance, Rtot, of the potentiometer. In Figure 1 we also have indicated the rest or End resistance, ER, that in wirewound potentiometers is measured between terminals (2) and (1) or (2) and (3) when the wiper is positioned in the corresponding end point where integral stops prevent further movement. In non-wirewounds the shaft shall be positioned at either of the theoretical end points, i.e., at the ends of the theoretical electrical travel (Figure 4). Sometimes the end resistance, ER, is expressed in % of Rtot. Precision wirewound potentiometers have terminations like the one in Figure 2.

If we measure the rest resistance we also get an extra contribution from the futile part of the resistance track (position B in the figure). If we move the wiper to position A the resistance will drop to a minimum, the so called Minimum resistance, MR. Instead of ER, for non-wirewound precision potentiometers the End voltage, EV, is specified.

According to industry standard of the Variable Resistive Components Institute (VRCI) measurement shall be done between the wiper and an end point. The shaft then is positioned at the theoretical end point (non-wire­wound) or at the end point (wirewound). The theoretical end point is represented by position B1 in Figure 3., the end points of a wirewound potentiometer are represented by start of actual electrical travel in Figure 1. The end voltage is expressed in percent of the input voltage E.

If we, as proposed, should measure in position B the result would be the same as in position A. The current through the DVM is assumed to be negligible.

The Minimum voltage MV is the smallest or lowest voltage between the wiper terminal and an end terminal when the shaft is positioned near the corresponding end of electrical continuity travel (Position A in Figure 3).

Actual electrical travel applies to wirewound potentiometers only and concerns the total travel between end points as shown in Figure 4.

In that point of the shaft travel where we start observing the first significant changes of the output voltage Type 2 potentiometers and trimmers sometimes have a definition of the Effective minimum resistance. Compared to the End Resistance, ER, it is approximately 10 times higher, for example 2% when the ER is specified to 0.2%.

That part of the travel where we have a continuous electrical connection between wiper and terminals is called Electrical continuity travel. In wirewound potentiometers it coincides with the total mechanical travel.

The Insulation resistance, IR, is measured with DC between the connected terminals and all other electrically conductive parts like shaft, metal housing, mounting details etc. IR should be at least 1000 MΩ.

Cycle. In potentiometer contexts we meet the expression cycle which means a shaft travel from one end point to the other and back to the starting point.

Rotational life. The specified maximum number of shaft revolutions that a potentiometer shall be able to stand with preserved resistance stability is called rotational life.

In principle a variable resistor may be used in two different ways with respect to the load: As a parallel resistor, i.e., as voltage divider or potentiometer, and as series resistor or rheostat, i.e., a type of current regulator.

Figure 5. shows the principle functions of a potentiometer and a rheostat. The current through the rheostat may never exceed Imax in the formula

This formula applies also to the potentiometer.

By means of the resistance track construction the output ratio may be made to follow non-linear functions like, for example, logarithmic, trigonometric etc. In order to specify the fidelity of the output ratio to such functions the concept conformity is used. It stands for permissible, practically determined output ratio deviations from a theoretical function. The conformity is expressed as a percentage of the total applied voltage.