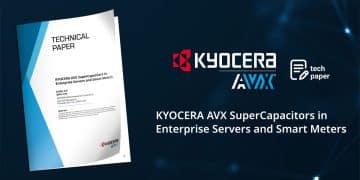 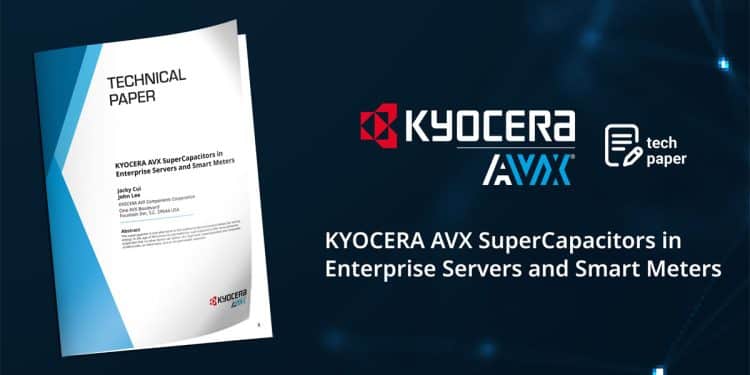 This technical blog article written by Jacky Cui and John Lee, KYOCERA-AVX Components Corporation, explains benefits and use of supercapacitors in enterprise servers and smart meters.

The supercapacitor is one alternative to the traditional electrochemical battery for storing energy. In the age of lithium-ion (Li-ion) batteries, supercapacitors offer many attractive properties that no other device can deliver. At a high level, supercapacitors are composed of electrodes, an electrolyte, and an ion-permeable separator.

Energy is stored using an esoteric phenomenon known as the electrical double layer, demonstrated by Hermann von Helmholtz in 1853. At the molecular level, the surface interaction between a solid and the ions within a fluid creates an extremely small capacitive layering. If the surface area is large enough, this double layer capacitance becomes significant and can be used for energy storage. Figure 1 depicts the basic supercapacitor structure.

Though the energy density of supercapacitors is significantly lower than Li-ion batteries, they offer several unique characteristics that make them attractive in many applications. First and foremost, supercapacitors exhibit fast charge times and have an effectively unlimited cycle life. In addition, they offer excellent temperature performance and the ability to support very high load currents. The Table 1. summarizes the differences between supercapacitors and lithium-ion batteries.

In modern enterprise and data center servers, solid-state drives (SSD’s) have become the de-facto standard for data storage. One of the biggest sources of data retrieval from these servers is online streaming video platforms.

These services require extremely high data transmission rates, which necessitate a proportional supply of power. When demand peaks, it is feasible that the power supply is unable to handle the instantaneous load increase, and the voltage level will drop beyond the minimum required threshold for optimal system operation.

A popular solution to forestall such an event is to provide a power boost circuit activated before the power supply voltage drops too far. Supercapacitors, together with buck-boost converter circuits, have become common implementations of such a solution. Batteries cannot be used in power backup or power-assist applications due to their naturally high electrical series resistance (ESR).

The SuperCapacitor’s low ESR and high bulk capacitance can provide the necessary instantaneous power to the buck-boost converter whenever the main power supply fails. A high-level diagram of this technique is shown in figure 2.

One may consider using several types of capacitors for the main energy storage device, including aluminum electrolytic, tantalum electrolytics, and supercapacitors. While aluminum electrolytics may be attractive from a cost perspective, they suffer from ESR issues, large physical size, and a limited lifetime. Tantalum capacitors are more reliable but generally lower in capacitance density. As such, many of them in parallel are required to supply
adequate energy during a power surge event. Supercapacitors offer the best characteristics for this application with high reliability, long lifetime, large capacitance density, and low ESR.

The rise in “smart” metering has ushered in a new era for utility companies. Smart meters enable gas, water, and electricity providers to precisely monitor their customer’s consumption, yielding insight into technology and pricing decisions. In addition, with two-way communication, some level of demand leveling can be achieved by controlling downstream power requirements and improving overall service during peak demand periods.

A typical smart-grid network is shown in the Figure 3. A series of repeaters are used to link customers’ smart meters to a central collector device using either LoRa or NB-IoT wireless links. A collector device maintains a traditional internet connection for shuttling data to and from the utility servers.

Backup energy demands in smart meters can be divided into two primary use cases: time synchronization and power-loss communication. In the first case, a mechanism is required to ensure that the smart-meter can keep track of time continuously, even in the event of total power failure for up to 48 hours. Historically, this has been accomplished with an extremely lowpower “real time clock” (RTC) chip and a coin cell battery. Unfortunately, these batteries have limited lifetimes and require replacement every 2-3 years.

Supercapacitors in the range of 0.5 to 1.5 farads can act as alternatives to the coin cell battery. They are quickly charged when power is available and can easily meet the 48-hour energy requirement for the RTC when power is lost. They are extremely long life, small form factor, low cost, and highly reliable.

The second application case for supercapacitors in smart meters is for power-loss communication. The collector devices, in particular, consume relatively high powers when communicating with the internet backbone. Many of the regulatory standards demand that these collector devices operate for up to one minute after total power loss and provide some visual indication of the fault condition. Traditional battery technologies fall short in this regard, especially considering the harsh outdoor environments they typically endure. Supercapacitors, on the other hand, are well suited to such demands. A 5V backup supply can be easily realized to meet the one-minute high power load using several devices in series and the 10-25 farads range. Battery service issues are therefore eliminated, offering a highly reliable solution with minimal cost overhead.

KYOCERA AVX is a leading worldwide manufacturer and supplier of a broad line of active and passive electronic components and interconnects. Their supercapacitors can be divided into two distinct families: SCC/SCM and PrizmaCap™.