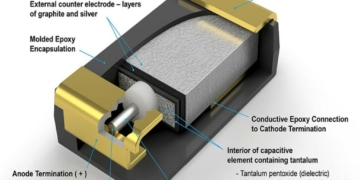 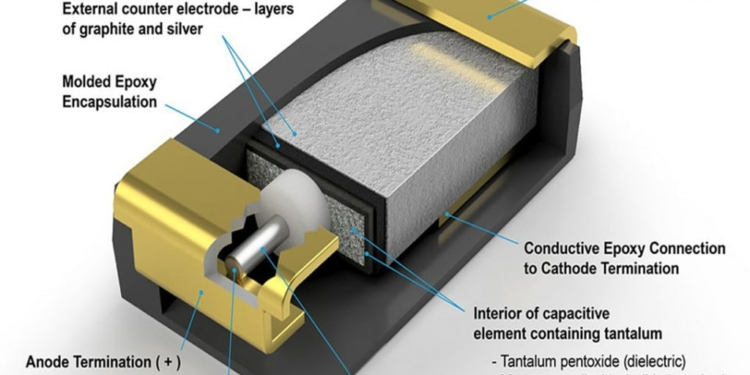 Tantalum and Niobium capacitors are belonging to electrolytic capacitor types and they are known for its high capacitance in small dimensions (high energy and power density), reliability and stability of its parameters.

Traditionally, tantalums’ advantages over aluminum electrolytics capacitors have been found in terms of capacitance per volume, parameter stability over temperature, and longevity; tantalums in general do not suffer from dry-out problems or issues of dielectric degradation when stored discharged for long periods of time. However, tantalums are generally more costly, have a more limited range of available capacitance and voltage values.

The main types include:

We will learn more about these types in the following chapters.

Niobium is a sister metal to tantalum, and shares many chemical characteristics with it, in addition to a few disadvantages and advantages of its own when used as a capacitor dielectric.

Niobium capacitor technology has existed for decades, but its limitation in maximum rated voltage, lower volumetric efficiency, incompatibility with low ESR polymer electrode, limited range and number of vendors keeps this technology as a niche line of tantalum capacitor industry today. On the other hand, there are still some advantaged (such as lower cost, safety and reliability) that worth a closer look and consideration.

Capacitor manufacturers have been evaluating niobium material for years every time the tantalum supply situation becomes unstable. Its lower cost base was also evaluated in order to replace low-voltage aluminium electrolytics.

Development of the first niobium capacitors started in former USSR already in 1960’s motivated by shortage of tantalum there. However, at that time, niobium powders were not available in appropriate low impurity, high quality level and the capacitor reliability was inferior to the tantalum capacitors.

Niobium-based material as easier to get and more abundant in nature captured attention by most of the leading tantalum manufacturers especially after the tantalum shortage and supply chain issues around year 2000. Beside niobium metal powder, NbO material has been introduced with metal conductivity level by J.Fife (U.S. Patent 6,391,275 B2) resulting in some advantage for capacitor application properties. Upon the new development and availability of low impurity Niobium/NbO powders within years 2001-2003 companies AVX, EPCOS (tantalum division acquired by KEMET in 2007), Hitachi (bought by Holy Stone in 2009, acquired by Vishay in 2014), KEMET, NEC and Vishay announced some early sampling and preproduction of niobium-based capacitors in 2002.

Construction of SMD chip niobium capacitors is identical to tantalum including manufacturing process route. Niobium or Niobium oxide powder are used instead of tantalum and the dielectric is Nb2O5 instead of Ta2O5 see Fig. below. Dielectric constant of Nb2O5 is 41 ~ twice higher compare to tantalum pentoxide, hower its density and electrical breakdown strength is about a half. This does not bring CV advantage of Nb/NbO capacitors over tantalum, however as the dielectric has to be ~ twice thicker compare to tantalum it brings benefits to stability and reliability.

Nevertheless, despite the very optimistic first results, niobium posed some early technical challenges that capacitor makers were struggling to overcome. The obstacles included high dc-leakage current (two to five times worse than for tantalum capacitors), increase of DCL with lifetime and susceptibility to damage by thermal shock during reflow manufacturing process. Low-CV capabilities have also been a problem because of the lack of high grade, high purity capacitor-grade powders at that time.

Niobium, as mentioned, is in many ways behaving very similar to tantalum capacitors. Niobium or NbO material can be processed into a form of powder with a stable oxide Nb2O5 (vs Ta2O5 in case of tantalum) as a high dielectric constant insulation. Niobium pentoxide has a dielectric constant about twice as high as that of tantalum oxide, however the density of niobium is only half that of tantalum, resulting in similar or slightly lower volumetric efficiency compare to tantalum capacitors.

an important advantage of niobium is the abundance of niobium ore in nature relative to tantalum ore; this relative abundance equates to lower cost and better availability within the capacitor marketplace.

Niobium metal is behaving like tantalum capacitors. However, as one of key advantages niobium oxide has a far higher ignition energy than tantalum which results in a significant reduction (up to 95%) of the ignition failure mode of niobium oxide capacitors when compared to conventional tantalum devices.

One of the “small” differences between niobium and tantalum that makes a big impact to capacitor features is that niobium sub-oxides are stable unlike on tantalum. There are no long term stable suboxides between tantalum and the dielectric tantalum pentoxide (Ta2O5). There are at least two suboxides on niobium-based materials that are stable: NbO and NbO2.

NbO2 is an oxide with semiconductive behaviour that exists together with the “main” dielectric Nb2O5 on the junction with Nb/NbO anode. The NbO2 oxide may grow with temperature (such as during the hot spot in dielectric failure site) and its responsible for the unique “self-arresting” mechanism.

In addition to the self-healing known on conventional tantalum MnO2 capacitors, the NbO capacitors are featuring one more feature when it is exposed to local breakdown, the NbO2 layer on dielectric will grow as a “second” insulation protecting the part to go to short circuit mode. Such part then continues in normal operation even in occasion of the main Nb2O5 dielectric breakdown. Under a specified operating conditions, NbO capacitors are thus one of the safest capacitor technologies on the market.

As mentioned, the density of niobium is only half that of tantalum, so twice as much material is needed per unit volume to provide the same charge. The Nb2O5 dielectric constant is higher, but you must form a thicker niobium oxide dielectric for the same voltage. That is good to reduce further the electrical field stress to the dielectric (and achieve better reliability) on one side, but there is a certain limitation in maximum dielectric thickness / maximum rated voltage, driven by powder impurities and formation techniques on the other site. In result, niobium-based capacitors are featuring significantly lower maximum rated voltage compare to tantalum capacitors.

One limitation of niobium-based technologies, is a lower maximum rated voltage (~10-16V) and lower CV in comparison to conventional tantalum capacitors with MnO2 (still higher compare to other capacitor technologies).

As tantalum supply chain consolidated, niobium-based technology has been ceased by number of manufacturers, thus limited sources and product range are the main current issues of the technology apart of the technical borders discussed above. Case sizes, mounting guidelines etc of the niobium-based chip capacitors are however identical to tantalum and tantalum polymer capacitors, that can be considered as drop-in alternative on the same footprint to avoid single source issues. Thus, the niobium-based capacitors can be considered as additional option where tantalum capacitor designs are considered with enhanced safety feature.

In comparison with solid tantalums the temperature dependence is slightly higher.

The higher the porosity and the finer the powder, the sooner the capacitor starts loosing capacitance due to the increasing time constant of the farthest in localized capacitor elements in the pellet. Because niobium powders have a slightly higher porosity than tantalum its frequency dependence is correspondingly higher as seen on Figure 23. above.

Because ESR is dominated by the MnO2 counter electrode we may expect approximately the same behavior as in solid tantalum capacitors.

The ESR in niobium / NbO electrolytic capacitors is slightly higher than that of solid tantalums at frequencies around 100 Hz. The difference decreases successively and is at 1 to 10 MHz negligible.

Where the niobium capacitors bring its benefits:

There is a wide range of applications were niobium-based capacitors can bring its benefits in low cost for high safety and reliability standards.

applications with benefits from downsizing of aluminium electrolytics capacitor:

high value in lower cost versus safety and reliability

Niobium-based capacitors present a niche capacitor market share within the tantalum capacitor industry. Nevertheless, some of its unique features, especially high safety, no short circuit failure mode under standard operating conditions and high reliability bring its value to the end users to remain as a viable capacitor solution in longer term future.

The NbO capacitor within its rated voltage is not likely to fail as a short circuit in applications that makes it one of the safest capacitor technologies on the market at the class of up to 8V operation voltage – counting with 20% derating of its maximum 10V range. The main applications are then 3.3 and 5V lines where safety is the prime focus such as aircraft or automotive electronic hardware.